‘What would these two gentlemen have to say about what is happening? 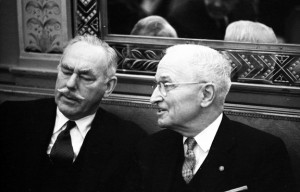 George posted this a few years ago. Both of these men were very familiar to him so he thought everyone would have an idea of what they thought. For those of you, like me, who only have a vague idea of who President Truman was and no idea who Dean Acheson was I have done a little research.

Harry S. Truman was the 33rd president of the United States from 1945 to 1953, succeeding upon the death of Franklin D. Roosevelt after serving as vice president. He implemented the Marshall Plan to rebuild the economy of Western Europe, and established the Truman Doctrine and NATO. Wikipedia. He would have been president while Dad graduated high school and went to university. (from age 16- 24). Truman’s no nonsense straight shooting manner really impressed Dad. In later years he photographed him extensively as a self assigned project. I remember dad telling me how nice President Truman was to the press covering him. He said that the ex President would send sandwiches and coffee out to the them. President Truman knew the value of hard work and valued those who did it. George has donated the collection of photographs to the Truman Library. You can find all of George’s Truman Archive Here

Was an American statesman and lawyer. As United States Secretary of State in the administration of President Harry S. Truman from 1949 to 1953, he played a central role in defining American foreign policy during the Cold War. Acheson helped design the Marshall Plan and was a key player in the development of the Truman Doctrine and creation of the North Atlantic Treaty Organization (from Wikipedia)

President Nixon said: “The nation, the Western alliance and the world all share in the loss of one of their stanchest champions.”

Mr. Nixon also said: “It is a measure of Dean Acheson’s stature as a man and statesman that almost 20 years after his service as Secretary of State he continued to be recognized as one of the towering figures of his time. He was a man not only of great achievement but also of rare intellect, of rigorous conscience and of profound devotion to his country.”

“I shall greatly miss both his wise counsel and his penetrating wit,” the President concluded. (from New York Times).

Remember this was said by a Republican president about a man who served Democratic Presidents. He must have been quite the man.

What would President Truman think?

On 13 October 1948, President Harry Truman made an appearance in St. Paul, Minnesota, stumping on behalf of both his own re-election campaign and a bid by the mayor of Minneapolis, fellow Democrat Hubert Humphrey, to land a seat in the U.S. Senate. During that appearance in St. Paul, President Truman delivered an address at the city’s Municipal Auditorium which was carried on a nationwide radio broadcast and included the criticism of the Republican Party referenced above:

Today the forces of liberalism face a crisis. The people of the United States must make a choice between two ways of living — a decision which will affect us the rest of our lives and our children and our grandchildren after us.

On the other side, there is the Wall Street way of life and politics. Trust the leader! Let big business take care of prices and profits! Measure all things by money! That is the philosophy of the masters of the Republican Party.

Well, I have been studying the Republican Party for over 12 years at close hand in the Capital of the United States. And by this time, I have discovered where the Republicans stand on most of the major issues.

Since they won’t tell you themselves, I am going to tell you.

They approve of the American farmer — but they are willing to help him go broke.

They stand four-square for the American home — but not for housing.

They favor a minimum wage — the smaller the minimum the better.

They indorse educational opportunity for all — but they won’t spend money for teachers or for schools.

They think modern medical care and hospitals are fine — for people who can afford them.

They approve of Social Security benefits — so much so that they took them away from almost a million people.

They believe in international trade — so much so that they crippled our reciprocal trade program, and killed our International Wheat Agreement.

They favor the admission of displaced persons — but only within shameful racial and religious limitations.

They consider electric power a great blessing — but only when the private power companies get their rake-off.

They say TVA is wonderful — but we ought never to try it again.

They condemn “cruelly high prices” — but fight to the death every effort to bring them down.

They think the American standard of living is a fine thing — so long as it doesn’t spread to all the people.

And they admire the Government of the United States so much that they would like to buy it.