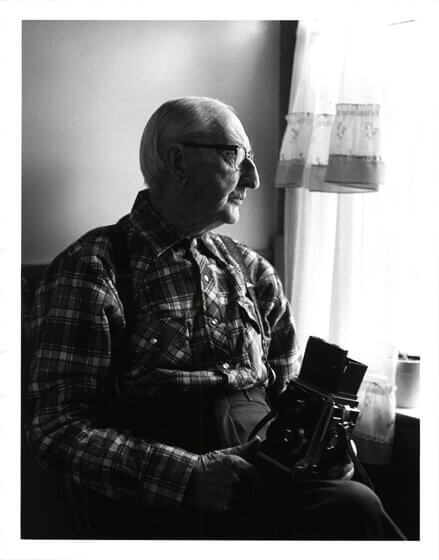 One day in the 1970’s David MacDonald , a member of the Canadian parliament, stopped by our Bona Fide Farm to tell me about a farmer who had photographed from the trenches during WWI. That’s how it was in the lingering of the 1960’s..people dropped in with interesting stories. When you say “photographed”, my systems go on alert so I called Mr.Turner and was told I was welcome to visit. At that period of my checkered past, I was doing a number of radio pieces for CBC on photography and the arts, so I took my tape recorder and headed up west.
Who I found and what I found was incredeibly exciting to me. Jack was living with his daughter and son in law who were still farming the property, but he definitely was not. He had converted his greenhouse into a primitive lab (no running water) and studio where he did his photography work. 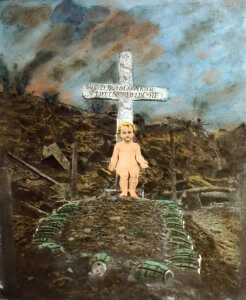 THE WORK!!! Scenes of the ravaged landscapes of war-torn France..the burning Cathedral at Ypres, a horse-drawn Red Cross Wagon, Lt. Carpenter’s grave ringed by hand grenades.. all stark hand coloured by Jack, mounted on plywood, cut out by a jigsaw and mounted an inch out from another scene which served as the background.
“These are photo sculptures, these are unique” I blurted out.
“Hmm, he said with typical Island reticence. By this time my tape was running and I said “We have to exhibit this work. It is very important.
“Hmm, all right. ” he said.
I enlisted the aid of the Premier of the province, Angus MacLean, himself a war hero and we arranged with the CBC to do a Turner exhibit. It was his first exhibition and he was 92 years old!
Confederation Centre Art Museum in Charlottetown purchased four of his photo sculptures and they are now in the permanent collection. He was thrilled by the idea that they would go in a museum, and I suspect thrilled more that he was paid $2500 for his work. “Boy, we should have done this long ago!” he nearly shouted in my ear. 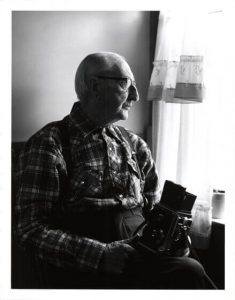 Well, I did remember Jack on Remembrance Day, but today I am sharing him with a lot of people who never heard of him. That is a joy. There are many wonderfull photographer’s out there that you have never heard of. By the way, he told me he would live to 100 and he did.

In 2016 the Confederation Centre for the Arts Gallery presented a retrospective of Jack’s work.  You can read more by clicking the button below.