Buried Treasure -a beautiful image arises from the Archives 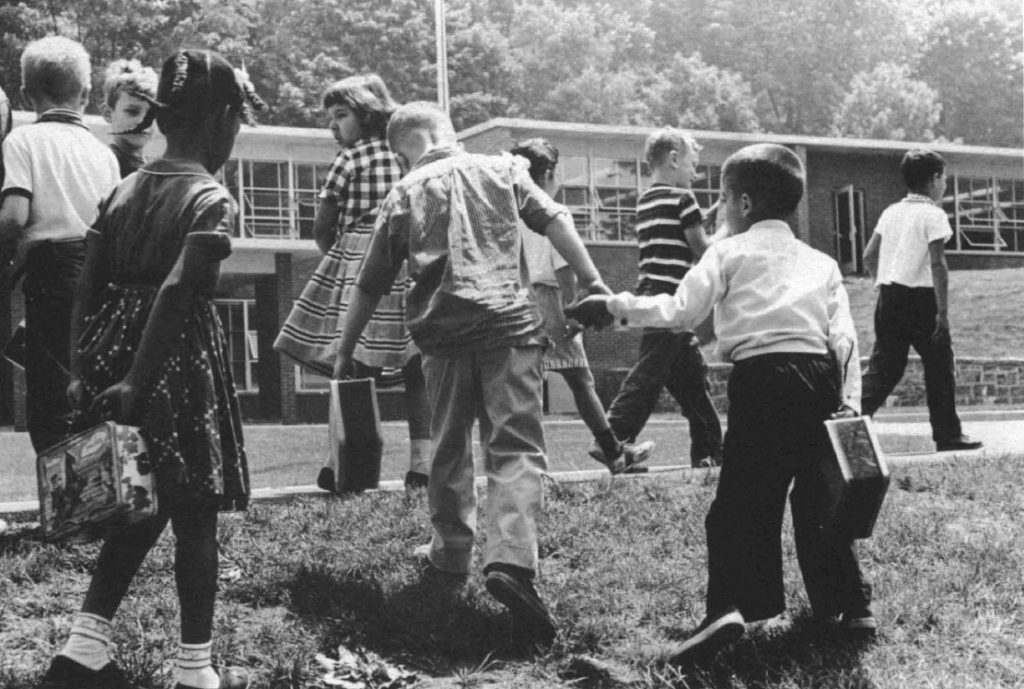 A message from an Archivist…

Earlier this year while going through George’s correspondence I found an email from Liesel Vinka Photo + Media Editor and Archivist with the Rockefeller Archive Center asking permission to use George’s photo, Children gather outside their school before the day begins, circa 1960 in a blog entitled Can Data Drive Social Change? Tackling School Segregation with Numbers.

It was wonderful to see this photograph, one of many that are buried in the treasure trove that is George’s negative archive. In the 1960’s and early 70’s George photographed schools up and down the east coast for Ford Foundation’s Educational Facilities Laboratories (EFL). He had a special talent for photographing children in his relaxed, natural style allowed children to be children, relaxed and natural.

What is the story here?

They say a picture is worth 1000 words, a cliche, yes, but this one only hints at a narrative and prompts the astute viewer to write their own story. The two boys, hand in hand, brothers? The little girl in the foreground with her lunch box and cute socks. Does she look tentative or uncomfortable? We’ve all had angst on our way into school, but what’s on her mind? The title of the Rockefeller Archive post sets the table for our interpretation of the photo. Is what George captured simply a quiet moment of emotion? Or is it part of the tragic story of the abuse of equal rights in America?

Ford Foundation’s Educational Facilities Laboratories (EFL) was a research organization funded by the Foundation from 1958 through 1977. They were well-known for their forward-thinking research into school facilities, and specifically their role in promoting the open plan school. We lived in New York at the time and I recall George traveling extensively to photograph new schools. I now live in Ontario I was surprised to hear that dad had come to Toronto many times on assignment for EFL. Ontario had built many schools in the 60’s in all levels, I wonder if his grandchildren went to any of the schools he photographed. This year George’s Granddaughter Leah Thompson was accepted into the fine arts program at. The College established 1967 was ground-breaking. The design of the campuses involved innovative design and new .
I look forward to finding the negatives to see what he captured.

George’s photograph was used in RE:source, a digital storytelling and educational site produced by the Research & Education team at the Rockefeller Archive Center (RAC). The historians, educators, and archivists, there examine the role that philanthropy played in shaping the world we live in today. If you are a history geek like me, then archivists are your super heroes. They are the ones who keep the past alive and available.

Normally when we think of school photos, we think of those stiff group shots we all have in our random cardboard boxes in various states of decay or preservation. But in George’s works you see photographs of children in schools as they naturally were. In his book The Book of Readers you will find this lovely picture entitled. “Boy or Man”. You can stare at it for hours to decipher the story. The image on the cover of the boy’s book appears to be an Indigenous boy or man and a dog or wolf. How is the story told? Is everyone reading the same thing? What grade are they in? What is sitting on the right side of the girl’s desk? Is this the same class or place as the picture above? Who can tell?

“Taking a picture takes 1/100 second, but to look at it and to understand it can take hours. Reading a picture is like reading a book. We must put in the time!”

The Hunt for Buried Treasure…

In George’s studio, in a fireproof safe, there are boxes and boxes of negatives. They are all neatly cut into strips of six frames, safely stored in sleeves. Occasionally there are grease pencil marks in blue or red, noting the images he preferred. I wonder what other amazing photographs are laying in sleeves in that fireproof archive, just waiting to be discovered again. George scanned some of them, but literally thousands and thousands of images are buried in these filing cabinets. I am working toward creating both the time and resources to scan many of them.