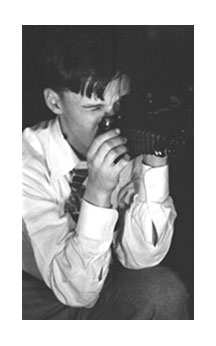 At 91, the American-Canadian humanist photographer George S. Zimbel is one of the last elders of photography faithful to the legacy of the Photo League, who in the fifties imbued their pictures with a personal commitment towards the people and the social landscapes they documented. Zimbel’s work is collected by major museums internationally, he has published numerous books and in 2016 he was the subject of an award winning feature documentary on his work called “Zimbelism”.

George’s collection is now managed by his children.  The collection consisting of prints printed by George, negatives and colour slides is in the process of being cataloged.  Cataloging of the prints has been completed. The thousands of colour slides, and hundred of thousand negatives will be an on going project.

In an era of increased manipulation of the photographic image by computer technology, Zimbel’s commitment to the “straight” photograph has become stronger. He sees the early 21st century as a period in which classic photography will have it’s last flowering.

My work begins with recording an image, but it is not finished until I have made a fine print. That is my photograph. A lot goes into a finished documentary photograph: a very personal view of life, a knowledge of technique, and of course, information. It is the information that grabs the viewer, but it is the photographer’s art that holds them. – George S. Zimbel

1935-1947 – Attended Woburn public schools. Edited student newspaper in 7th grade & produced photographs for the first yearbook,”The Initou” in his graduation year. At age 14 he got first professional camera, a 4/5″ Speed Graphic and began photographing for a local newspaper and businesses.

1949 – Parallel to academic studies was signed as a stringer for PIX Inc., one of the first photographic agencies in the U.S. That summer studied at The Photo League with John Ebstel, learning the art of fine printing and the philosophy of the documentary photographer. (IVAM p.40) Freelanced, producing work for architectural and construction industry clients. Introduced Garry Winogrand to the Columbia Camerea Club darkroom where they formed the “Midnight to Dawn” club.

1952-1953 – Assigned to 555 Combat Engineer Group as photographer where he produced a book of aerial and land based photographs of the Rhine River. While on leave, made photographs in England, France, Germany & Italy which later became his European Photographs Exhibition.(p.9,48,63) Returned to New York in May 1953 to begin his career as a freelance photographer. Did self assigned essay at Philadelphia General Hospital on the pediatrics section. (IVAM p.114,117) Begin receiving assignments from Parents Magazine, Redbook Magazine, Medical Image Magazine & New York Times Magazine & Drama page.(IVAM p.109)
Photographed Parade Magazine: “Futuristic Playground”

1955 – Photographed Chester Bonn ranch in Fredericksburg Texas GI Couple, El Paso, Texas and then to New Orleans Louisiana to photograph “Bourbon Street 1955” (IVAM p.84-95) Married Elaine Sernovitz on Feb 3 1955 in New Orleans and returned to New York City where she continued her work as a short Storywriter and member of the Korean Reconstruction Agency at the UN and he continued freelancing. (IVAM p.108) Began photographic projects for book “Schoolhouse” with essay “Best Friends” in Woburn Mass., “A Farm Boy’s Morning” in Oconomowoc Wisc.” and children’s photographs from New York. (IVAM p.110)

1980 – George & Elaine Zimbel decided to leave the farm and chose Montreal where he again took up the life of a freelance documentary photographer. Did assignments for Canadian National RR, Canada Steamship, Bombardier and Northern Telecom.
He also started doing assignments again for The New York Times Sunday Travel Section, continuing a relationship that had begun in the 1950’s. His extensive portfolio in the field of education attracted the attention of the McGill University Information Office, and he began photographing that campus intensely. This resulted in many brochures and posters, and eventually to appointment as chief photographer for the book “McGill, a Celebration” published by McGill Queens Press. Three of his images were chosen for posters by the City of Montreal and this led to an assignment to a photograph a campaign for the Minister of Tourism of Quebec, aimed at the U.S. market. By this time Zimbel was working in both French and English, and he says he felt excited to explore Quebec and have these images shown in the U.S. Both the Montreal posters and the Quebec campaign won awards.
He began an association with Serge Vaisman, director of Art 45, a gallery that had championed the exhibition of contemporary photography in Montreal. This resulted in four solo exhibitions in the eighties: “Marilyn Monroe, The Seven Year Itch 1954”; “New York 1950’s/1960’s”; “The European Work 1952/1953” and “Singles & Series, 1951/1985”. Prints from these exhibits form the base of his archive since most of his original prints were destroyed in a fire at his lab in New York in 1966.
His work started to be collected by the Canada Council Art Bank, The Steinberg Collection and The Claridge Collection. As he became increasingly interested in archival printing and exhibition, his work was seen and acquired by the collections of The Museum of Modern Art, New York; The National Gallery of Canada, International Center of Photography, New York; Houston Museum of Fine Arts; Musee du Quebec; Musee d’art Contemporain de Montreal, & Tokyo Metropolitan Museum of Photography and the Brooklyn Museum. There followed a solo exhibit at The Photographers Gallery in London in November of 1992. His work appeared in the MOMA exhibition and book “U.S. Politicians” in the fall of 1994. In February 1995, he had a solo exhibition at Stuart B. Baum Inc., Chicago and in 1996 was represented in Houston MFA’s “New Acquisitions”.
His work began appearing in the auctions, Christies New York & London, Swann in New York, Butterfield & Butterfield auction in San Francisco and Dorotheum Auction in Vienna. In the month of May 1999, he had a solo exhibition in Toronto curated by Stephen Bulger Gallery, appeared in a 1960’s exhibition at Bonni Benrubi Gallery in New York, and a group show of Quebec photographs at the CMCP in Ottawa.

2000 – Retrospective exhibition at IVAM, in Valencia Spain, January 2000. 120 works dating from 1944 to 1999 were included in the exhibition. A catalogue was published with photographs and poems by Zimbel, as well as essays by curator Josep Vicent Monzo, Henry Lehman and Vicente Molina Foix. In November 2000, his retrospective was moved to Sala Millares, Madrid under the auspices of the Minister of Culture of Spain. In April of 2000, he had a solo exhibition “Documents” at John Cleary Gallery, Houston. Later that year he was awarded a Lifetime Achievement Award by the Canadian Photographers in Communication Quebec Branch.

2010 – AIPAD: Member of the panel discussing “The Photo League” Interviewed for video produced by The Jewish Museum, NYC & The Columbus Museum of Fine Art regarding experiences at the Photo League. IVAM: Exhibit “Collections” in Valencia. Invited to IVAM as a contributing artist

2017 –August 4th,  Elaine passed away surrounded by family after a short illness.  George put down his camera, closed his darkroom and has since retired from public life.