A Catastrophic Grease Fire, the night all was nearly lost. 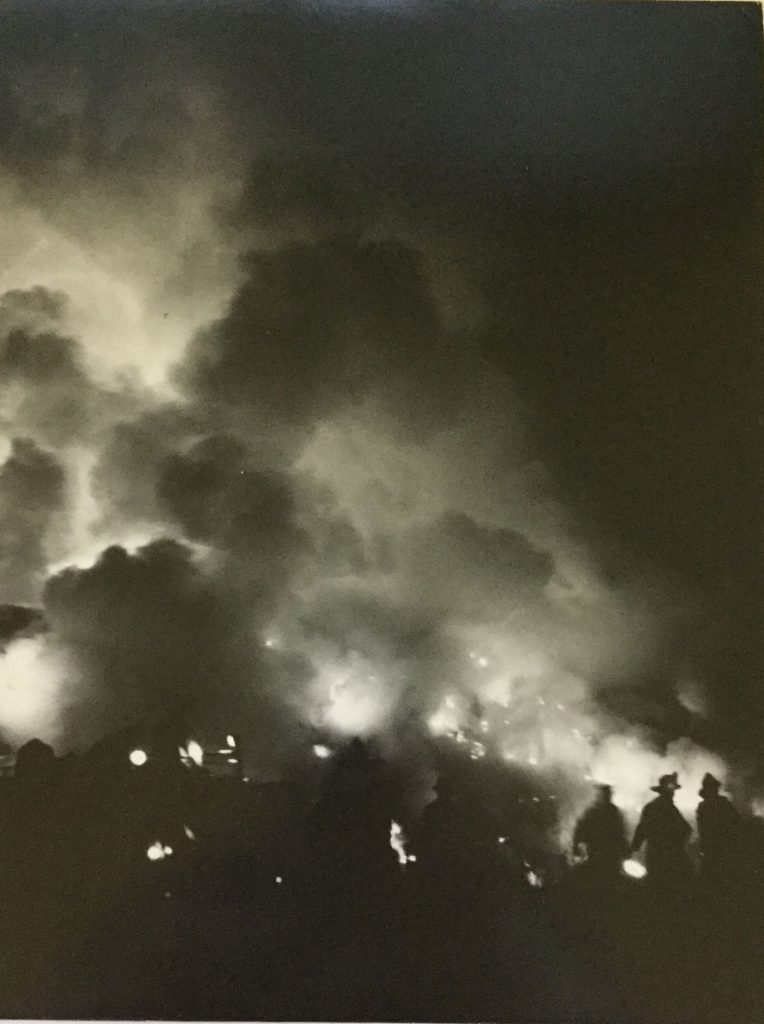 “George what is your biggest fear?”

“Loosing a child” he replied without a moment’s hesitation.

“After that” I asked

“Loosing my negatives. You know I nearly did once….”

Rumour was George Washington had slept there on a march towards Albany, New York. The road that passed in front of the house was originally called Old Albany Post Road.

To give you some idea of how old the house was, the floor boards in the dining room were made of a tree that had since become extinct called American Chestnut. Gardening in the backyard, was like amateur archaeology, we would find cannon balls and other military paraphernalia from the American Revolution just a few inches below the surface.

The house was modest but lovely. It was situated on a wooded half-acre lot that included a barn, where my father built an office and darkroom.  My parents bought the property for $22,000 in 1960 after migrating first from New York City to Dobbs Ferry, New York (John Cheever country) and then on to Continental Village.

It was a great place to grow up, there was a local lake to swim and fish in, lots of places to ride bikes, and a forest and modest mountain behind the house to explore before the invention of deer ticks. Elaine published a local paper called The Continental Village Times that started off modestly but became more and more investigative and issues driven as was Elaine’s journalistic way. George joined the local Volunteer Fire Department and because he worked from home when he was not on assignment, he was a valuable asset, as so many of the firefighters worked in New York during the day.

At one time in the 40’s & 50’s Continental Village was a lake resort town popular with left leaning Jewish clients from NYC. By the time we moved there, the demographics of the village were changing and as NYC cops and firemen migrated there, the politics became more conservative.

The closest large town was a place by the name of Peekskill, most famous for a very violent race riot in 1949 when the Black singer Paul Robson was scheduled to perform a benefit concert in support of civil rights with Woodie Guthrie and Pete Seeger. The target of the riot was Blacks, Jews and America’s most despised ethnic group at the time, Communists.

By the time we arrived in CV if anti Black and Jewish sentiment existed in the community it did so very quietly.

The one ethnic group that did cause a lot of problems was “the greasers”. They used to gather on a small bridge directly in front of our house, and drink, smoke and talk greaser, a native language loudly spoken and laced with profanity.

My parents, extremely tolerant – “live and let live” people, became weary of the nightly performance of “Grease” on the bridge and my father politely asked Greaser upper management to put a lid on it after 9 pm, so their four children could sleep. Well, that didn’t go over well and eventually the cops were called.

In the summer of 1966, my parents went camping and left the four of us with a babysitter for the weekend. Midway through their trip, a New York State Trooper cruiser rolled up to their camp site and asked if they were indeed Mr. and Mrs. George Zimbel (as was the nomenclature at the time).

They immediately thought that something horrific had happened to their children, the Trooper assured them that we were fine, but that their barn had burned down, and arson was suspected.

The building was a total loss. The only saving grace was that George had told his fellow volunteer firefighters that if anything ever happened to the barn – the most important thing to get out was the negatives. They had heroically rushed into the burning building and extracted most but not all of the negative files.

“After the fire I would think, about an image I wanted to print”, George said in the feature documentary Zimbelism (2017) “I’d start searching for the neg and then realize that it must have gone up in the fire”.

Though it has never specifically been said, I’m sure that this catastrophic event was a contributing factor in our parent’s decision to leave New York and move to Prince Edward Island in July of 1971.

A post by Matt Zimbel. Photographs by George Zimbel